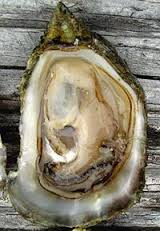 Olympia oysters were abundant in San Francisco Bay until their population collapsed in the late 1800s due to overfishing.

The stock has never recovered and may now be facing a double whammy, according to research published January 15th from the University of California, Davis' Bodega Marine Laboratory. Researchers found that juvenile oysters were up to 40% smaller, and invasive snails ate 20% more of them, when both oysters and snails were raised under ocean conditions forecast for the end of this century. (Atlantic oysters imported to the West Coast brought predatory snails such as the Atlantic oyster drill, which uses acid and a rasping tongue to drill holes in oyster shells.)

The results highlight the dangers of multiple stressors on ecosystems. Eric Sanford, professor of evolution and ecology at UC Davis and first author on the study, said, "You might decide to go to work if you had a toothache. But what if you had a toothache, the flu, and a broken leg? At some point, multiple stressors will cause natural systems to break down." Sanford also explained the per capita rise in predation by saying, "It's like if you go out for tacos. If the tacos are smaller, you're going to eat more of them."