DoMiRe-labelled marinated products have been specially developed for the medium price segment. The first batch of marinated products took off in November 2007. The range of products consisted of three items: mussels in oil, squid in mayonnaise, and seafood cocktail in oil. The company says that appealing packaging, high quality of the raw material, exclusive recipe and attractive prices have enabled it to win ca.15% of the regional market.

The product portfolio of the company also include marinated shellfish of higher price segment produced under the TM Mediterana. The product entered the market in September 2006. The recipe for Mediterana-labeled products was developed with respect to the Mediterranean cuisine. These marinated products are remarkable for more sophisticated packaging, easy to open thanks (bend and pull out). Mediterana-labeled range has been actively promoted in Moscow and Saint-Petersburg as well as in federal chains in regions. 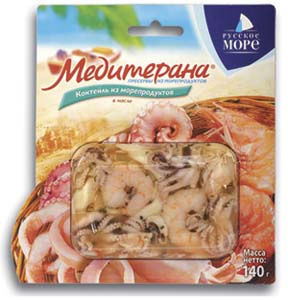 The company's DeMiRe and Mediterana labeled products do not contain GMO and are characterized by low content of vinegar which is extremely important for consumers keen on product natural properties and healthiness.

The net weight of the company's new products is 140 grams, the storage life is 3 months, and the storage temperature is 0 to -4 C.