Raw customs data processed by Fishnet analysts show that in the first 9 months of 2018 the Russian exports of fish & crustaceans (HSC group 03) from the customs territory (equal to land + Russian EEZs except for Barents Sea) have increased both in terms of volume and value as compared to the same period of 2017. The figures cover all exports except for the catches shipped to foreign buyers from beyond the Russian customs territory in the Barents Sea (from beyond demarcation line with Norway catches are not subject to mandatory customs clearance).

Table 1. Dynamics of export shipments covering more than 90% of the market in January-September 2018

Note: the figures cover all the shipments’ volumes as they are stated in customs documents (without conversion to round weight). More detailed information featuring particular products is given in Russia’s Seafood Exports report made by FISHNET and offered for sale here.

Table 2. Dynamics of export shipments by selected countries of destination

A number of countries dramatically increased their purchases of Russian seafood in the period under analysis:

In the meantime, several countries decreased purchases of seafood from Russia:

As for the positions of leading importers of Russian seafood, the trends were as follows: 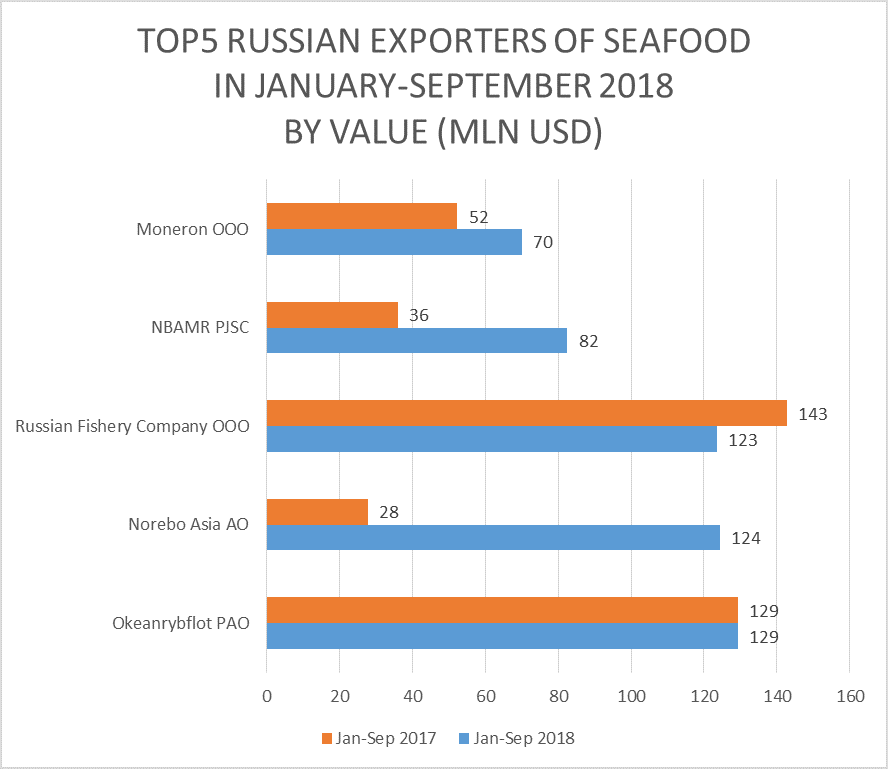 Dramatic rises were displayed for the following exporters:

Negative dynamics was registered for:

In the first nine months of 2018 as many as 195 more Russian companies started to export seafood to the international markets. The newcomers altogether exported more than 85,000 metric tons of seafood. Some of them were: