Trends in Russian seafood imports in first nine months of 2018

Russia’s seafood imports in the first nine months of 2018 displayed a big leap in value and a small setback in volume on the same period of 2017, according to a report prepared by Fishnet.ru analysts based on raw customs records.

Table 1. Dynamics of shipments covering more than 90% of the market in January-September 2018

Table 2. Dynamics of import shipments by selected countries of origin

In the first nine months of 2018 a number of countries started shipping seafood to Russia, while in the same period of 2017 Russia did not import fish from them. For instance, Singapore companies shipped more than 600 tonnes of butterfish and pink salmon. Viciunai Rus OOO imported 283 tonnes of shrimp Litopenaeus vannamei from Cuba.

Russian seafood imports from Japan and Ecuador jumped dramatically: by 266% by volume (a wide range of finfish and other aquatic products) and by 22% (mostly shrimp, butterfish, tuna and hake) correspondingly.

• rising trends for PELAGOS P/F, PP FAROE PELAGIC, BAKKAFROST SALES P/F (all of them based in the Faroe Islands); 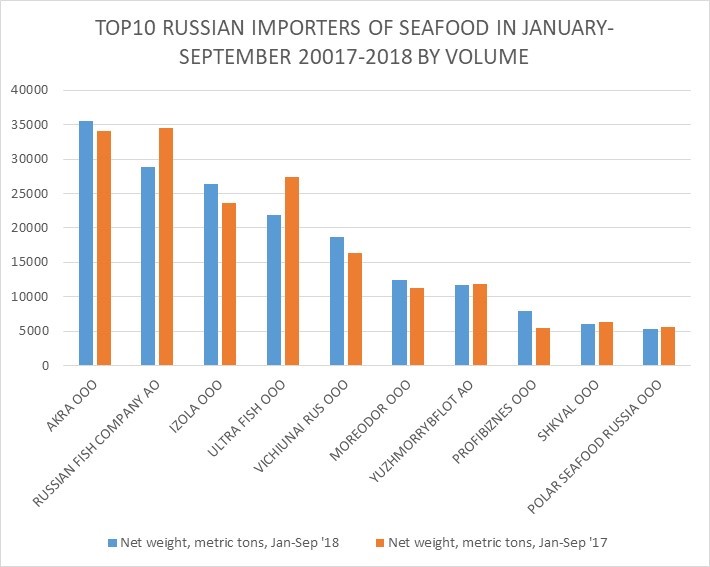 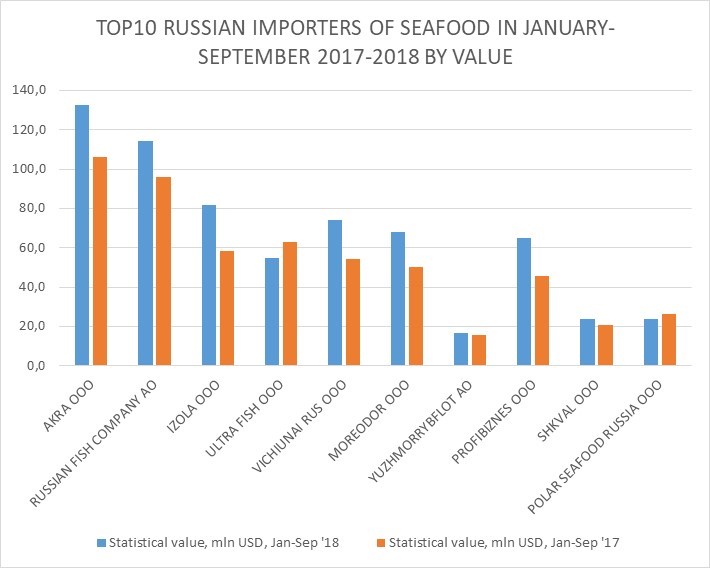 As for the companies’ positions, the trends were as follows:

negative for
Preobrazhenskiy Rybokombinat AO -65% by volume, to 919 metric tons, mostly saury and mackerel,
Food Trade OOO more than -30%, a wide range of seafood,
Siam OOO -62% to 760 tonnes, crayfish and squid from China.

Note: This is only a summary. For full report please contact Vera Aldokhina at vera@fishnet.ru.
Import report for 12 months of 2018 will be published in early 2019. Please feel free to order it at early-bird prices at vera@fishnet.ru.