THIS YEAR'S MOUSTACHE MARCH KICKSTARTED ON BOARD HELGA MARIA AK

This year the Icelandic Cancer Society’s annual Moustache March was kicked off with a ceremony held on board HB Grandi’s trawler Helga María at the Reykjavík harbour. Health minister Kristján Þór Júlíusson and Jens Garðar Helgason, chairman of Fisheries Iceland unveiled a handsome moustache in front of Helga María’s wheelhouse. 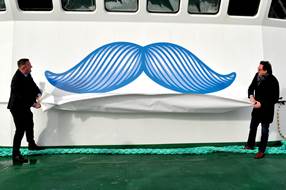 According to Ólöf María Jóhannsdóttir, the Icelandic Cancer Society’s marketing manager, an agreement was reached last month for Fisheries Iceland to be the main sponsor of Moustache March – Men and Cancer for the next three years, with the agreement signed at the Saltfish Museum in Grindavík.

‘It’s very important for the Icelandic Cancer Society to have such a powerful sponsor as Fisheries Iceland and this agreement means financial security for this vital effort for the coming three years,’ she said, and commented that the event on board Helga María was highly successful. Jakob Jóhannsson, chairman of the Icelandic Cancer Society addressed guests and placed special emphasis on raising awareness of prostate cancer with the slogan ‘Look after your own bottom.’

‘We brought in a barber from Barber Company who shaved three gentlemen who had agreed to let their full beards go, just keeping the moustache. These were Jens Garðar Helgason, Fisheries Iceland’s vice-director Haukur Thór Hauksson and one of Helga María’s crew, Sigurgeir Frey Pálmason,’ Ólöf María Jóhannsdóttir said.