Garment and textile, seafood and woodwork production has slowed down as orders have dried up amid high inflation in some key export markets.

His company is focusing on the domestic market.

Garment and textile firms have seen orders from foreign partners decline since July.

The Vietnam National Textile and Garment Group (Vinatex) said its affiliates had orders for until October, though equivalent to just 50-70% of capacity, and none for November and December.

According to Vinatex, the yarn market is likely to remain difficult since demand has not shown any signs of improvement while costs have increased this year due to higher fuel and cotton prices.

Garment and textile enterprises could continue to struggle until the first quarter of 2023, according to Viet Dragon Securities.

SSI Securities said many firms have started to receive orders for the first quarter but at levels well below their capacity, and attributed this to high inflation in the U.S. and EU.

Ho Quoc Luc, former president of the Vietnam Association of Seafood Exporters and Producers (VASEP), said seafood, especially shrimp and prawn, exporters would also face hardship in the coming months, even until mid-2023, due to the inflation, higher cost of warehousing in Western Europe caused by the ongoing energy crisis, and fiercer competition from other countries.

Nguyen Chanh Phuong, vice president and general secretary of the Handicraft and Wood Industry Association of HCMC, said earlier this month that some wooden furniture exporters have secured orders but others have struggled, but the industry might still be able to achieve this year’s export target of $16.5 billion.

The country’s total exports in September were worth $29.82 billion, down 14.6% from August, according to the General Department of Vietnam Customs. 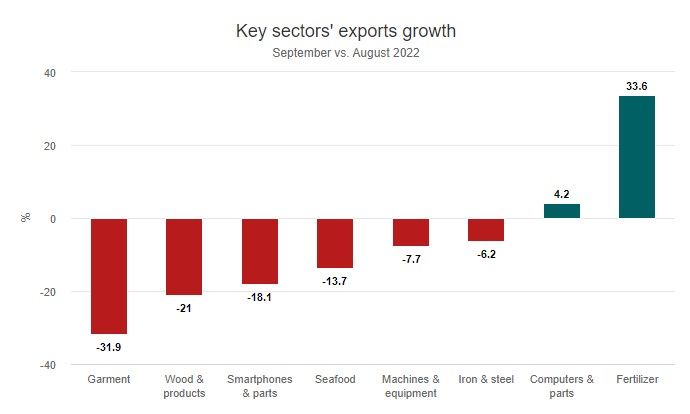 VnDirect Securities expected GDP growth to slow down in the fourth quarter to 5.6% due to emerging external difficulties, adding exports and FDI inflows could also be sluggish in the coming quarters.

Nguyen Le Quoc Tuan, general director of Song Huong Foods, said: "I feel businesses will face difficulties in the near future when inflation and bank lending interest rates go up. This will lead to an increase in borrowing costs, making it difficult for them to expand their markets. The global economic situation is also unstable."

Thue Quist Thomasen, CEO of Decision Lab, which is commissioned by EuroCham to make the annual Business Climate Index (BCI), a barometer of business sentiments among European companies operating in Vietnam, said with its low inflation, improved credit rating and continued GDP growth, Vietnam has rosier prospects than many other countries.

The BCI decreased recently but is still above average. Some 42% of EuroCham members expect stronger FDI inflows into Vietnam in the remaining period of 2022. 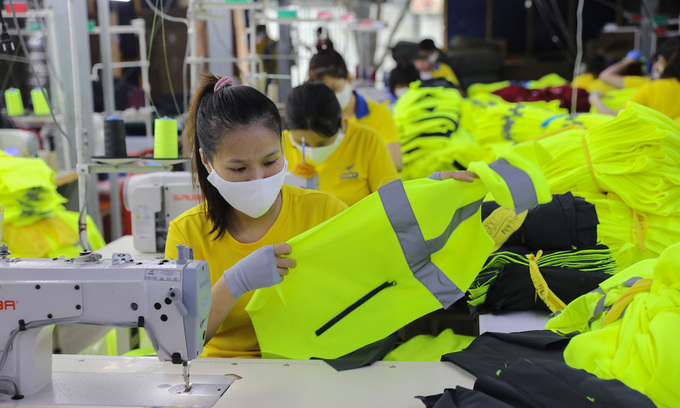 Workers are seen inside a garment factory in Ho Chi Minh City. Photo by VnExpress/Quynh Tran