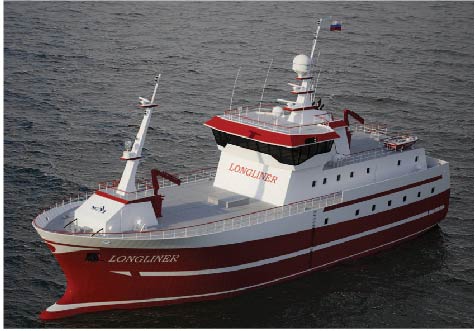 As a prototype for the new series the project's initiators have chosen Gier-II longliner design (Norway) which has already proven its high efficiency in the Barents Sea. Under a contract with Pella shipyard the vessel's technical project has been prepared by the UK-based company Mak Duff with the following specifications: length - 47.5 meters, width - 12 meters, reefer hull capacity - 500 cubic meters, main engine - 1200 kilowatt, crew - up to 20. The shipyard and the customer altogether approved the technical specifications, defined the limit price of vessels and optimal scheme of construction funding and transfer to charter of the first series of vessels (up to 5).

According to the agreed financial scheme, construction of the vessels will be backed by the shipyard's own capital (as well as by attracted non-budget funds), the vessels to be registered in the Russian international register of vessels, and then to be purchased by the leasing partner which in its turn will hand them over to charterer Persey-Pella, a joint company established by Persey fishermen and Pella shipyard to become a single operator of the pilot project at its all stages. ZAO Sberbank-Leasing (closed jsc) has already given its principal consent for participation in the project. The estimated term of the vessel's payback amounts to 6 years at the maximum.

In the first quarter of 2012 Pella shipbuilders have launched construction of the lead longliner of the series which will conduct sustainable bottom fishery in the Barents Sea (probably in other areas as well).

Technical documents based on the specifications of Mak Duff have been prepared by Pella naval architects. The project provides for use of the most up-to-date equipment from such prominent manufacturers as MAK, Catterpillar, BPI, Mustad, Furuno and others.

As per late April 2012 Pella has already finished all bottom sections of the new ship. Keel laying is planned for mid-May 2012. The lead ship is to be built and furnished with onboard equipment in the fourth quarter of 2012.

In 2013 and every following year Pella shipyard is to build 2-3 longliners of the series.