The dynamics of the Pandalus Borealis fishery in the Barents Sea seems to be changing direction. Meanwhile the scientists are making projections for the catch and stock abundance in 2021, reports Megafishnet.com.

According to our sister portal Fishnet.ru, a certain decline is taking shape in the shrimp fishery in 2020 with the number of Russian vessels involved decreasing to 20. As a result, the total Russian shrimp catch in 2020 will also be lower than in the previous year. As per November 8, it is equal to 21.1 thousand tons (see figure 1).

The catch of shrimp in the Russian EEZ by vessels from Norway and the Faroe Islands has also significantly decreased. 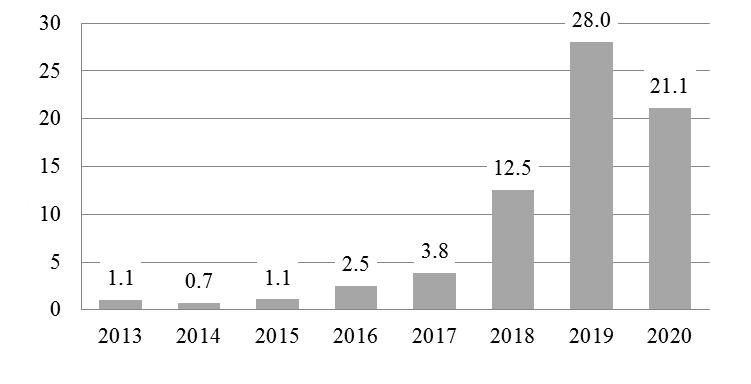 Meanwhile the sharpest surge in the scale of shrimp fishing occurred in 2019. The Number of Russian vessels reached 23 units with the total annual catch amounting to 28 thousand tons. As in the previous years, the fishery took place mainly in Russia’s EEZ, periodically the vessels shifted to the adjacent water area of the open part of the Barents Sea known as "enclave" or the loophole.

In 2020, the number of fishing days also decreased, the catch rates declining too. (figure 2 below).

Figure 2. Average annual catch rates of the Russian trawlers in the Barents Sea shrimp fishery in 2013-2020, metric tons per vessel per day 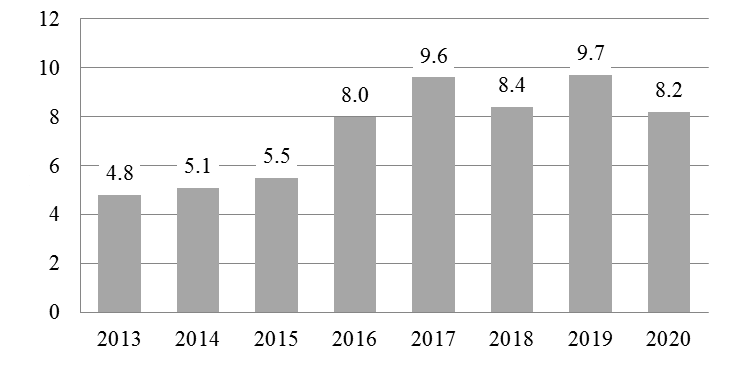 According to ICES estimates and domestic research data (the Polar branch of VNIRO), the state of the shrimp stock in the Barents sea is not a cause for concern. The recommended catch of shrimp in the Russian EEZ in 2019 was increased from 13.5 to 33.5 thousand tons, and the recommended catch in 2020 and 2021 was determined in an even larger volume of 40 thousand tons.

The deterioration in the results of shrimp fishing in 2020, according to the scientists, may be due to the peculiarities of the distribution and the tactics of the fishery. The densest concentrations of shrimp suitable for effective harvesting are formed in limited areas. It is in these areas that the main group of the Russian fleet has been fishing in recent years, and the foreign boats work together with the Russian vessels. The impact of a large group of high-performance vessels leads to a reduction in the size and density of schools, their "mechanical" dispersal. This is probably the reason for the decrease in the catch rates.

The decline in shrimp fishery in 2020 can be considered relative. The total Russian catch of this speices in the Barents Sea this year is second only to the record for the XXI century in 2019. The average catch rates are lower than in 2017 and 2019, but they were at a fairly high level in 2016 and 2018.

It is difficult to assess the prospects for the fishery in 2021. Given the relatively high intensity of fishing over the past two years and the sensitivity of shrimp concentrations to its impact, there seems to be no reason to expect a significant improvement in the situation.

In the early 2000s, the scale of Russian shrimp fishing decreased from year to year, and in 2006 it was completely discontinued. The decline in shrimp catch in the Barents Sea was due to large catches in the North-West Atlantic and, consequently, fluctuations in prices for shrimp products. For the Russian shipowners, an important reason for stopping the operations had to do with the low margins of shrimp harvesting by SRTM middle freezer trawlers, which were mainly used on the grounds. The average daily catch of the vessels of this type usually did not exceed 2.5 – 3 tons per fishing day.

Since 2013, Russian shipowners have started using second-hand foreign-built vessels specialized or converted for the shrimp fishery. In 2013-2015, initially only one Russian trawler was deployed on the shrimp grounds, then the number of shrimpers began to increase rapidly. In 2018, up to 15 Russian vessels participated in shrimp harvesting, and the total annual catch was about 12.5 thousand tons (figure 1).

For copyright please write to vera@megafishnet.com.