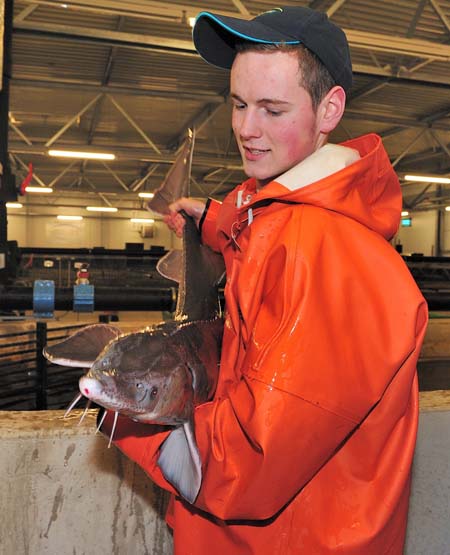 Contractor of "Fish from the desert", The United Food Technologies, is setting up centers for aquacultural production of premium black caviar in Russia, according to www.megafishnet.com.

"Fish from the desert" is an ambitious aquaculture project in Abu Dhabi, world's largest recirculation plant for sturgeon and the production of premium caviar which was launched earlier this year and proved successful.

The investor, the Arabian Bin Salem group, has appointed United Food Technologies AG (UFT AG, Weinheim/Germany), who specializes in the planning and design of aquaculture projects, for the construction of the world's largest recirculation plant for sturgeon.

Russia's leading fish portal www.fishnet.ru (in Russian) www.megafishnet.com (in English) reveals big plans of the company on the Russian and Eastern European markets.

Megafishnet.com: Do you have any completed or ongoing projects in Russia, please give some details, especially for farmed caviar production, if any?

-We are focussing particularly on Russia and the entire east European market. The objective is to set up several centres for the production of premium caviar with the tried, tested and lucrative UFT technologies in the foreseeable future. After several years of intensive preparation, two very promising projects are currently in the implementation phase: one near Rostov (17 metric tons caviar annual production) am Don, another in Novosibirsk (8 metric tons caviar). 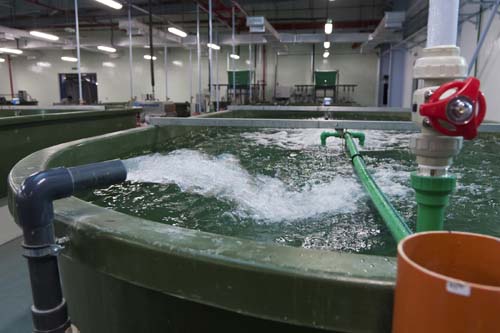 Megafishnet.com: Does your company rely on any Russian specialists and expertise in sturgeon farming as Russian experts are known to help farm sturgeon in many parts of the world from South America to China.

- Russian specialists have made a very important contribution to the development of the production of farmed caviar in Germany. The biological principles of sturgeon farming, the technologies of caviar harvesting are areas in which UFT has been working together closely and successfully for a long time with Russian specialists. It is natural for us to maintain close relations with Russian specialists and research centres in order to achieve a continuous exchange of opinions and transfer of know-how. German plants and technological know-how paired with the specialist knowledge related to fish species of the local experts: that is our recipe for success.

Megafishnet.com: Could you compare the Abu Dhabi "Caviar From the Desert" project with any projects of similar scale in Russia. We know at least about one half as large KROK Sturgeon Farming Complex with a capacity of 16 MT of sturgeon caviar per year operating in Kaluga region near Moscow.

-It is always difficult to compare projects operating under different conditions. It has been observed in general that aquaculture in closed re-circulating systems develops from manufacture up to efficient, industrial production levels. The facility planned and built by UFT in Abu Dhabi is a milestone on this path: With a planned annual production of 32 to caviar and 465 to sturgeon meat, it is not just the first facility of its kind in the near east but also the largest facility worldwide as well. Thanks to the visionary spirit, which so strongly characterises the economic development in the United Arab Emirates, a large facility has been created here. With this, we have thrown open the door to a new dimension of aquaculture - as a sustainable, environmentally friendly as well as a highly profitable means of food production of the future. Among the significant advantages of the recirculation technology is the fact that only this technology is capable of definitely delivering clearly defined production quantities of high quality under the most varied climatic conditions, whether in the desert or in Russia. 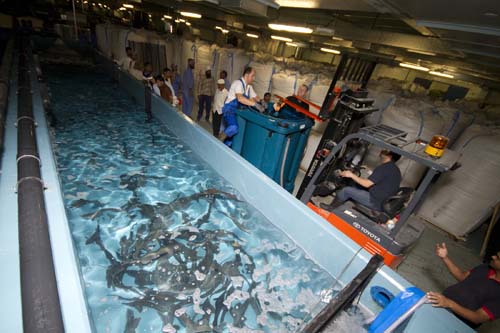 Megafishnet.com: Where is Russia on the scale of your priorities and what is the potential of Russia in aquaculture both domestically and internationally, from your point of view?

- Russia, but also Kazakhstan and Eastern Europe in general represent key target regions for UFT - not just because of the long tradition of fish farming, but also because of the increasing demand. We are certain that Russia will soon count again among the leading nations in aquaculture productions in a few years - and we will provide our time tested and always progressive UFT technology "Made in Germany" towards this development. As a long term partner, we understand the local structures and would like to support the development in every way and with great perseverance.

Megafishnet.com: What are the strong and the weak points of Russian aquaculture as you see them and how the expertise of your company could contribute to rectify the drawbacks and profit from the advantages?

-Doubtlessly, structural changes have particularly influenced Russian aquaculture. Investments in economic sectors with long term perspective such as agriculture and aquaculture have started again only a few weeks ago . This creates a lot of confidence for the future, not least because of the expert knowledge available here. It is now important to intensively support the Russian research institutes and to foster investment plans on the part of politics and bureaucracy as well. UFT would be very happy to contribute towards the renaissance of Russian aquaculture. We combine competence in construction of facilities, in technologies related to fish farming of the most varied species and in global trade of fish products with management experience in projects of industrial scale. This makes UFT a competent and reliable contact partner for Russian investors.

Megafishnet.com: Can you outline your long-term plans for Russia? Is there enough market for the increasing farmed black caviar production in this country and on the global marketplace in the long term considering the possibility of future recovery of wild sturgeon stocks?

- It is primarily sturgeon and caviar that take the first place in our view. Other countries are already ahead with respect to investments in fish stock. The structures in Russia are as yet unclear in this respect. Suchlike could be associated with research institutes, if the necessary investment funds are available. The requirements related to stocking material related to intensive aquaculture and those for natural water bodies are entirely different. With respect to natural bodies of water, corresponding German and European programmes are based in research institutes. However, along with sturgeon farming, there are many fresh and salt water organisms that can be considered as very worthwhile aquaculture objects in Russia.

Megafishnet.com: Talking about aquaculture and marine culture in general, how do you see the role of the Russian industry in the global division of labour in this sector?

- Russia possesses enormous, not as yet utilised natural resources, inland as well as on the coasts. It is up to the Russians themselves to develop and use these resources. The basics for it are already available.
Backback to news list
Published by:  Megafishnet.com
Print out version Print out version
{{countTopicsText}}
{{post.ftopic_author}}
{{post.body_processed}}
Reply Edit Delete complete delete
Comment
Reply
You can post your comment if you sign up or log in.