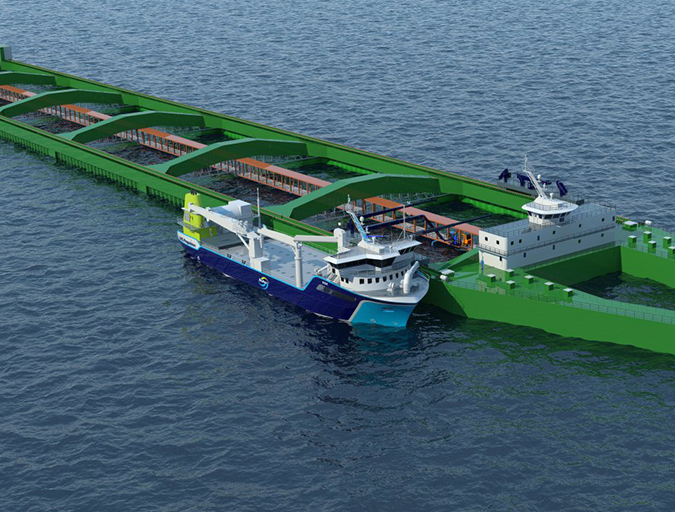 To appreciate the scale of salmon producer Nordlaks’ grand vision for the future of salmon farming, imagine a steel ship in the sea stretching the length of nearly five football fields placed end-to-end, and about 54 yards wide, reports www.megafishnet.com with reference to Global Aquaculture.

On the Havfarm, or “Ocean Farm” — designed by NSK Ship Design for Nordlaks — a series of net pens within the structure would be submerged 65 yards deep. In them up to 10,000 tons of salmon would be grown in exposed areas near to shore where swift ocean currents will mitigate the impacts of effluent from the fish and reduce the risk of sea lice.

The project, estimated to cost about NOK 600 million ($71 million), awaits the approval of the Norwegian government, which has offered financial incentives to companies that can develop new technologies to make use of underutilized locations and solve issues like sea lice and disease without the aid of chemicals or veterinary drugs.

Companies that meet the government’s concessions criteria, announced last summer, will pay about NOK 60 million ($7 million) less for permission to develop their projects, and will then be required to share their lessons learned. NSK and Nordlaks are anticipating a decision on the concessions this spring.

We do not know very much about the host-parasite interaction. Parasites have very sophisticated mechanisms to hide from the hosts’ immune system. Although there have been numerous vaccines against sea lice, they have targeted the adult lice and to date with no success.

“[Concessions] have the express goal not to increase production but to develop new technologies to deal with exposed areas and decrease sea lice,” Håkon Åndanes, Havfarm project manager for NSK Ship Design, told the Advocate.

One way to reduce sea lice as much as possible is to keep the smolt on shore longer than usual and transfer them to the Havfarm to reach maturity later in their life cycle. The fish will be about 1 kg and louse-free when transferred to the Havfarm for a 10-month growout period, explained Bjarne Johansen of Nordlaks via e-mail.

This would minimize the time the fish are in the sea, and therefore their exposure to sea lice.

If built as designed, the Havfarm would be longer than the world’s largest hangar ship, modern aircraft carriers and the former supertankers that now serve as hospital ships, according to Guinness World Records.

The vessel’s design calls for steel louse skirts 30 feet deep around the perimeter except for the back/aft of the ship, that, according to the company, “will make sea lice history.” Sea lice tend to concentrate in the top 10 meters (30 feet) of the water column. It borrows from the mooring technology used in North Sea oil drilling operations so that the Havfarm rotates 365 degrees around one moored point.

The area in which effluent can disperse will be 27 times larger than for standard pens, according to the NSK website. “This also provides a totally chemical-free production,” according to NSK.

Solution to a giant problem

Since the advent of large-scale salmon farming in the 1970s, producers have battled these tiny, destructive and abundant wild copepods. Sea lice cost farmed salmon producers globally about $550 million a year in lost production, treatments and additional manpower, noted Ian Bricknell, a sea lice expert and professor at the University of Maine’s Aquaculture Research Institute.

And there are several factors beyond costs that are driving the push for innovative, non-chemical solutions: regulatory pressure, public opinion, interest in sustainability and demand for third-party certification.

“There are interesting designs coming out,” said Bricknell. 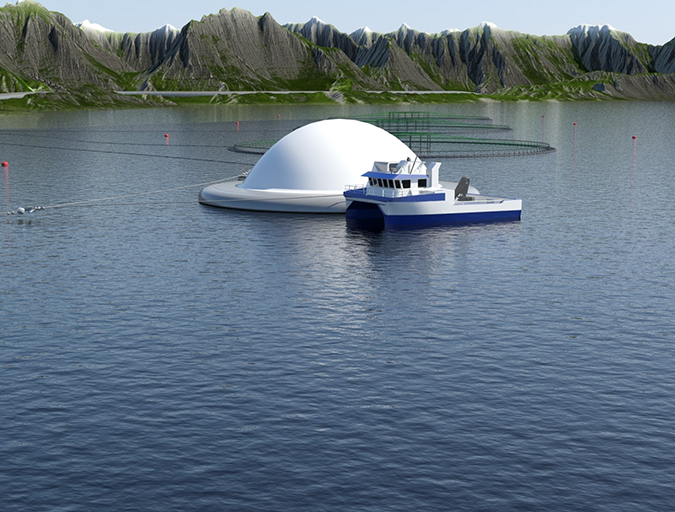 In the battle against sea lice — as well as securing expansion for salmon farming in Norway — everything is on the table: new sites, re-designed farms, and new non-chemical and traditional treatments.

“If salmon aquaculture is to be sustainable, the lice challenge must be addressed with cost-efficient measures that allow firms and societies to continue to thrive with the industry,” wrote Ole Torrissen, principal research scientist at the Institute of Marine Research in Norway in a 2013 paper published in the Journal of Fish Diseases.

In addition to the Havfarm fish farm, several other chemical-free innovative technologies are emerging.

Hauge Aqua and Marine Harvest announced an agreement in February to develop and test “The Egg,” a closed-containment system that remains in the water, not on land. The pods are quite literally in the shape of an egg, moored vertically in the water so that about 10 percent of the pod — its pointed end — is above water, leaving the wider, rounder bottom submerged.

The Egg could replace cage culture systems, using existing infrastructure, and is designed specifically to prevent sea lice and escapes, allowing sea water to come in from the bottom.

“That’s going to give you a huge benefit in reducing the amount of sea lice those salmon will see and you’re going to see less chemical controls,” said Bricknell.

The water inlet and outlet points are “double-secured so that escape is not possible,” according to Hauge Aqua.

The deal involves full-scale testing of The Egg. Marine Harvest applied for 14 of the development concessions designed to drive major technology shifts.

“This concept is very exciting,” said Marine Harvest ASA CEO Alf-Helge Aarskog in the announcement. “If we succeed, today’s challenges with sea lice and escapees will be history. Simultaneously, this lays the foundation for a sustainable growth along the coast.”

Sea lice and escapees have led to a “substantial rise” in production costs in recent years, noted Aarskog. The pods can fit into typical Norwegian salmon farms. “The Egg provides the foundation for further sustainable growth in the salmon farming industry, while reducing the environmental footprint,” the companies stated in their February announcement.

Meanwhile, USONIC Ltda., in Puerto Montt, Chile, has discovered that ultrasound deployed underwater directly into fish pens has a lethal effect on juvenile stages of the lice and reduces sea lice loads per fish by 30 to 50 percent without harm to the fish or marine mammals due to 20 KHz per transmitter used.

“After five years investigating ultrasound to control sea lice and after eight full-scale trials in the sea, we do not have doubts that this is a great technology, [especially] with no environmental effects,” Prado said, through a spokesperson who accepted the Global Aquaculture Alliance’s (GAA) Global Aquaculture Innovation & Leadership Award, sponsored by Preferred Freezer Services, in the fall of 2014 on his behalf.

A technology aimed at juvenile sea lice may provide a refreshing approach.

“There has been a lot of effort directed at controlling the adult lice,” wrote Bricknell in an e-mail exchange, “and much less effort targeted at the planktonic and larval stages. The main issue is that by the time the adults develop the fish have been severely damaged by the lice. What is needed is a comprehensive series of treatments that contribute to an integrated pest management strategy.”

In the near-term, Bricknell wrote, expect to see compounds that mask the attractiveness of salmon to sea lice and new strategies for “cleaner fish” — or other fish species that swim among the salmon and eat the sea lice. Using wrasse as a cleaner fish for salmon lice control was developed in the late 1980s and several species of wrasse are used in Norway. Aquaculture Stewardship Council standards for farmed salmon specify that cleaner fish must be native species. Researchers at Memorial University in Newfoundland, Canada, have looked into the feasibility of breeding the native cunner, a common shoreside fish, to carry out such duties.

“Recently EWOS launched diets that are the first generation of lice-masking compounds,” said Bricknell. “These reduced the lice burden by around 60 percent. I’m sure others are also working on chemicals that push lice away from their hosts. Some will attract males away by using sex pheromones. Others will trick lice into thinking the salmon are not a suitable host to settle on,” said Bricknell.

If salmon aquaculture is to be sustainable, the lice challenge must be addressed with cost-efficient measures that allow firms and societies to continue to thrive with the industry.

EWOS’ functional feeds now include host-masking compounds. These are non-chemical, said Bricknell, because they are naturally occurring scents that block the sea louse’s ability to smell the salmon.

Mussels and oysters have been found to eat sea lice, according to studies conducted by Bricknell’s group. “However, the use of integrated multitrophic aquaculture sites for Atlantic salmon is in its infancy and the optimization of the position of the shellfish component needs to be fully developed,” said Bricknell.

A new generation of anti-sea lice drugs is in development and in field trials, Bricknell noted, expecting they will be better targeted to sea lice with less environmental impact. “However, the cost is expensive and many of these drugs are in a line awaiting funding from the relatively small aquatic pharmaceutical industry.”

An effective vaccine represents the “holy grail” but that is likely to be a long-term prospect. “We do not know very much about the host-parasite interaction. Parasites have very sophisticated mechanisms to hide from the hosts’ immune system. Although there have been numerous vaccines against sea lice, they have targeted the adult lice and to date with no success,” said Bricknell.

Sea lice have been a particularly difficult puzzle to solve since they have been shown to grow resistance to chemical treatments, rendering them ineffective. Historically, a new drug is effective for about 10 years, said Bricknell.

“The main source for re-infestation comes from the farms themselves where regular parasite treatments put a constant selection pressure on resistance development,” wrote Torrissen in 2013.

SLICE — the trade name for the pesticide emamectin benzoate — was a common treatment for sea lice, until resistant strains of sea lice emerged several years ago.

Merrielle MacLeod, a senior program officer for the World Wildlife Fund, recently worked in Chile with several salmon producers. The details of her conversations regarding environmentally friendly controls for sea lice were confidential, however MacLeod said she urged companies operating in close proximity to collaborate on solutions.

“Every single company is doing a lot right now,” she said. “They’re trying new things and I think they’re having mixed success. Some of the things they’re doing are really cool. We’re really excited to see the industry trying all of these new things.”