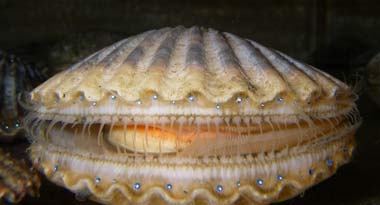 Located near Nanaimo, Vancouver Island, British Columbia, Island Scallops is Canada's largest private marine research hatchery and first fully integrated shellfish producer. The company has pioneered scallop culture in BC since 1989 and has developed a premium hybrid "Pacific Scallop" for farming in local waters. But it is now facing a growing threat to its very existence, and OA may be at the heart of the problem.

On February 25, Island Scallops CEO Rob Saunders announced that the company had lost three years of scallop production worth $10 million. He has begun laying off about 20 employees at the farming operation and processing plant. "I'm not sure we are going to stay alive, and I'm not sure the oyster industry is going to stay alive," Saunders told his local paper. "It's that dramatic."

Scallop seed is produced at the hatchery in Qualicum Beach and reared in the ocean in small net cages attached to horizontal "longlines." The longlines are submerged about 10 m (30 ft) below the surface in water about 30 m (100 ft) deep. From hatchery to harvest takes about three years.

Saunders said, "I'm not claiming lower pH is the only cause of the die-offs, but it is a leading indicator. We need to study the correlations. Multiple factors may be involved, but I have never seen water as corrosive as now in my 35 years of shellfish farming.” He told GOH that CO2 levels have increased dramatically in the waters of the Georgia Strait, with pH levels falling as low as 7.23 (global average is 8.1) and pCO2 rising as high as 1400. Saunders said, “We had serious problems not only in the hatchery tanks but also in the nursery stage for the scallops. The higher acidity level means the scallops have difficulty making their shells and their immune systems are compromised, making them more susceptible to infection. We can buffer our onshore tanks, but what to do about water upwelling on our coasts is another matter entirely.”

If the Canadian Department of Fisheries and Oceans funds a proposal submitted by Saunders, fellow members of the BC Shellfish Growers Association, and others, scientists will use genomic tools to identify which genes are turned on and which are turned off when shellfish are subjected to stress such as high pCO2. Once factors responsible for ocean acidification-related mortality are determined, a selection program can begin producing resistant strains of shellfish. Saunders said, “Genetics may be the last best hope for the shellfish industry surviving.”

Note: The Ocean Acidification Report will update the BC scallop die-off story in our next issue. While it is not the most significant recent news about OA (the story below may be), it certainly has attracted wide media coverage. See CBC News, Vancouver Sun, Homer Tribune, Globe and Mail, Times Colonist. Perhaps it’s the “ten million scallops, 10 million dollars” that focused attention on the huge economic costs of OA if we fail to deal with it.